A New Rifle: For fighting, not fun.

India needs to reequip its police and armed forces with […]

Field Marshal Wavell who was a distinguished infantryman before he became a somewhat less distinguished Viceroy of India wrote: “Let us be clear about three facts: First, all battles and all wars are won, in the end, by the infantryman. Secondly, the infantryman always bears the brunt; his casualties are heavier, he suffers greater extremes of discomfort and fatigue than the other combat arms. Thirdly, the art of the infantryman is less stereotyped, and far harder to acquire in modern war, than that of any other arm.”

US Marine’s rifleman creed teaches: “My rifle is my best friend. It is my life. I must master it as I must master my life. Without me, my rifle is useless. Without my rifle, I am useless. I must fire my rifle true. I must shoot straighter than my enemy who is trying to kill me. I must shoot him before he shoots me.” Down to the basics, soldiering is about killing. An army that does it best wins.”

In his 1953 best selling novel “Battle Cry” Leon Uris had a marine recruit being punished for the transgression of calling a rifle a gun by being asked to do rounds naked of the drilling ground chanting: “This is my rifle, this is my gun. This is for fighting, this is for fun!” In military parlance a gun can be anything that fires a projectile. A howitzer is a gun as is a cannon. The rifle is a specific weapon used by an individual soldier. It is a gun fired from shoulder level having a long spirally grooved barrel intended to make a bullet spin and thereby have greater accuracy over a long distance. It is what a soldier mostly uses to do his work. Stalin famously said: “The only real power comes out of a long rifle.” Douglas MacArthur typically put it into context when he said: “Whoever said the pen is mightier than the sword obviously never encountered automatic weapons.”

The reader may be wondering why a smaller caliber weapon when it seems that for most things in life, bigger is better? This change in thinking, as far as rifles were concerned, was as a result of three observations. First was due to the fact that the large caliber round, 7.65 mm or .30 caliber (bullet diameter) needed a large explosive charge to propel it at the desired 7–800 meters per second.

Their development owes to a well-known post WWII study of the pattern of usage of infantry weapons by US infantrymen in combat by Brig. SLA Marshall, the prominent military analyst. Marshall’s study revealed that the most infantrymen used their weapons very little, preferring to take cover and firing occasionally. The study also revealed that the infantrymen most likely to fire their weapons were those closest to a soldier firing a Browning automatic rifle. This was because when the BAR man fired, he was able to literally hose down a wide arc in front of him. When he did this the opposing infantry lay low and infantrymen by his side were able to rise from behind cover and fire their weapons. This clearly suggested a need for greater deployment of automatic weapons.

The reader may be wondering why a smaller caliber weapon when it seems that for most things in life, bigger is better? This change in thinking, as far as rifles were concerned, was as a result of three observations. First was due to the fact that the large caliber round, 7.65 mm or .30 caliber (bullet diameter) needed a large explosive charge to propel it at the desired 7–800 meters per second. The recoil as a result of this explosive charge in the automatic fire mode often made the weapon virtually uncontrollable. Not only was the soldier unable to aim properly, but also often the recoil caused injuries.

The other observation was that what was needed was not a marksman’s weapon firing accurately up to 800 meters. Statistical analysis by the US Army of rifle engagements in WW II, Korea and Vietnam revealed that 90 per cent of them were at ranges less than 300 meters and 70 per cent at 200 meters and less. Therefore, the emphasis on long-range accuracy of 300–800 meters was found somewhat redundant.

What followed from the increasing dependence on automatic weapons was that greater quantities of ammunition were now needed. The propensity to consume ammunition reached the astounding rate of 50,000 rounds per kill in the Korean War. This obviously means that the soldier now needs to carry greater quantities of ammunition. The smaller the caliber, the greater the number of bullets the soldier can carry into the battlefield.

The debate is coming around full circle now. After fifty years militaries world over, especially the ones who have fought long wars during this period are actively considering going back to the old 7.62 round. This is mostly because of the development of soldier’s armor, which easily stops the 5.56 round. Riflemen want stopping power. The reduced weight of the 5.56 also means reduced lethality. Battlefield experience also tells that while the 5.56 round does more damage, it kills less. It often leaves behind wounded soldiers still capable of combat. US soldiers in Iraq and Afghanistan have discovered to their cost that a wounded but determined soldier can exact as much damage as an able bodied one. 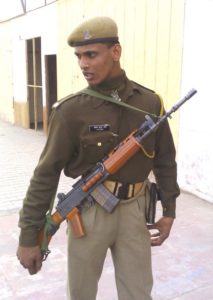 The INSAS, a rifle that drew heavily from other designs but never really performed like any of them. During the Kargil Conflict damaged and jammed weapons returned to the factory and fresh lots had to be sent out. There were complaints of jamming, the magazine cracking due to the cold and the rifle going into automatic mode when it was set for three-round bursts. There was also a problem of oil being sprayed into the eye of the operator. Some injuries during firing practice were also reported. Similar complaints were also received from the Nepalese Army.

In August 2005, after 43 soldiers were killed in a clash with Prachanda’s Maoists, a Nepalese Army spokesman called the rifle substandard and their counter-insurgency operation would have been more efficient with better weapons. Even now we hear of Indian infantrymen in combat zones prefer to fight with the AK-47, like US infantrymen preferred it to the M-14 in Vietnam.

Recognizing this, the Indian Army has now decided to phase out the INSAS and in 2011 issued tenders for a new quartet of infantry weapons. Whatever be its choice the Army must get on quickly with its final evaluations and take a decision soon. Considering the time taken — six years — clearly a sense of urgency needs to prevail and a decision is taken soon.

Recently the Indian Army has rejected an indigenously built assault rifle, citing poor quality and ineffective firepower, and is soon likely to take a fresh call on procuring similar weapons to replace the INSAS rifles. The Army decided to reject the 7.62×51 mm guns built by the Rifle Factory Ishapore after they miserably failed the firing tests. It has been reported that he rifles had excessive number of faults and stoppages to the extent of more than twenty times the maximum permissible standards. The Army had earlier rejected another indigenously built assault rifle called the 5.56 mm Excalibur guns, as it did not meet the required standards.

Given the pattern of recent defence spends it seems our strategists once again seem to have reverted to the old habit of spending all on the big and extravagant and least likely to be used, than on arms for the foot soldier who in the ultimate analysis, even today, still wins or loses battles for his country. Thus while debates have raged and money obviously made on purchases of SU-30 and Rafale jets, 155mm self-propelled guns and Main Battle Tanks, nuclear submarines and aircraft carriers, little thought has been given to the foot soldier and his weapon. This is the weapon that is used for fighting and is not for fun on Republic Day at Rajpath.

India needs to reequip its police and armed forces with […]
A New Rifle: For fighting, not fun.
​