The Israeli police have furnished evidence that has implicated Israeli Prime Minister Benjamin Netanyahu (Bibi) on charges of corruption. It has been alleged that the Israeli Prime Minister acted against the interests of the public. These revelations come in two separate cases called ‘1000’ and ‘2000’ that the Israeli police has been investigating since January 2017. To add to the woes of the Netanyahu administration, there are two more charges of corruption that are under investigation: ‘Case 3000’, and ‘Case 4000’, and each is to do with “bribery, fraud and breach of trust by the Prime Minister”.

Broadly, the two charges against Prime Minister Netanyahu are to do with the first two. In the first, ‘Case 1000,’ the Netanyahus are accused of receiving gifts, money and other items from Hollywood mogul Arnon Milchan and Australian Businessman James Packer. It is alleged that Benjamin helped them get a US visa and ever since he and his supporters have showered them with gifts. These gifts have largely to do with the lavish lifestyle of Israel’s First Family, and the money was used to repair their pool, their floor, buy jewellery and cigars. Sarah Netanyahu, the wife of the leader, has also been indicted in this case for taking up to $100,000 to throw parties and hire cooks, which are in clear violation of the law. In another incident, Sarah demanded $2,700 worth of jewellry. The Prime Minister has said that these were just gifts given by a friend, but the police have released evidence that points to there being a pattern, code and structure to the way these demands were made. 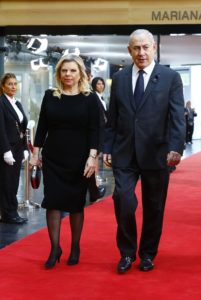 ‘Case 2000,’ on the other hand, has to do with helping the proprietors of Yediot Aharonot, a large media organisation, squash their closest rival, Israel Hayom, in exchange for favourable media coverage. While Hayom was seen to be pro-Netanyahu, Yediot was not. While there is no actual proof of Netanyahu directly influencing the circulation of one newspaper over the other, it was revealed during the investigation that the Israeli Prime Minister had asked the owner of the newspaper, US billionaire Sheldon Adelson, to not start another edition of the paper.

The last two cases: Case 3000 and 4000 are still under investigation. The former has to do with the purchase of two submarines from ThyssenKrupp, a German company. The deal is a multimillion-shekel deal that has been termed as a scandal, in which key members of Netanyahu’s administration are accused. The country’s former Finance Minister, Yair Lapid, called it the ‘biggest graft scandal in the history of Israel.’  Netanyahu is not directly a suspect in the case. As Lapid has asserted, “I don’t know… he couldn’t have known.”

Lastly, ‘Case 4000’ pertains to Netanyahu’s relationship with Bezeq, a telecommunication company in Israel, when he worked in Communications Ministry and as Prime Minister. These  revelations came to the fore after a report surfaced through a request for the freedom of information act earlier this year.

In addition, while on his trip to India, a tape featuring a conversation between Yair Netanyahu, the PM’s 26-year-old-son, and a friend was released on Channel 2, Israel’s biggest television news channel. In these tapes, the PM’s son asks one of his friends, “Speaking of prostitutes, what’s open at this hour?” Talking of a bar, he says, “It’s possible the waitresses there go with the flow.” But what is most intriguing is what Yair says to the son of Israeli tycoon Kobi Maimon: “My dad arranged $20 billion for your dad, and you’re whining with me about 400 shekels.” The statement is alleged to have been made while borrowing money at a strip club.

When did the trouble begin?

Trouble began for Netanyahu in January 2017, when the police began an investigation into the first two cases. The cases came to the public’s attention when tapes with hours of secret conversations between Netanyahu and Arnon Mozes, the publisher of Yediot Ahronoth, were leaked. Other woes for the Prime Minister began when the police raided Arnon Milchan’s, a Hollywood mogul and arms dealer, residence and discovered receipts, bills and other evidence that showed the relationship between the billionaire and the Prime Minister. What followed was a series of leaks from the on-going investigation by the media. Israel’s Channel 2 began broadcasting clips, audio snippets of conversations.

As the investigation gathered pace, Netanyahu, Milchan, Sarah began being interrogated. Netanyahu has all along denied these allegations of fraud, bribery and corruption. More importantly, he has managed to retain the bulk of his supporters in the Parliament. Things drastically changed for him when his closest aide Ari Harrow, ‘turned a states’ evidence’ against Bibi and his dodgy deals. Harrow traded his silence for a softer sentence and subsequently has dealt one blow after another to the Netanyahu government.

The leader has stayed his ground and claimed that this is a witch-hunt and an effort to hurt his image. He has hit out at the Police Commissioner, Roni Alsheich, and claimed that the investigation is unbiased and compromised. The Likud Party and its machinery have hit out at Alsheich.  The Commissioner has claimed that private detectives are following the investigating officers and ‘powerful’ men are trying to get the investigation shelved. Hayom, a pro-Netanyahu paper, has run story after story claiming that Alsheich is wrong, and he has turned it into a personal vendetta after the ‘Umm al-Hiran’ incident and has leaked, spoken to and presented the evidence to the public.

There is, however, a growing resentment amongst the people who have been pouring out on to the streets in growing numbers.

The faces of this anti-corruption rallies are Elad Yaniv and Meni Naftali, an unlikely duo: Yaniv is a lawyer and Naftali is a former housekeeper, manual labourer and house painter.

Naftali’s fight is for democracy and against corruption. He once served as the chief caretaker of the Prime Minister’s house and was abused by First Lady Sarah. He filed a suit against Israel’s First Family in court and won and in the process, inadvertently opened a Pandora’s box: afterwards, another case was filed by another staffer at the PM’s house and several others have claimed maltreatment. Naftali has become one of the main faces of the popular unrest against the Netanyahus and their lavish lifestyle. 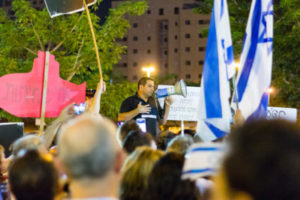 In December 2017, there were five anti-corruption protests that were held in Tel Aviv, organised by Naftali. Every Saturday, for over 40 Saturdays, he has organised protests near Attorney General Avichai Mandelbilt’s house, demanding Netanyahu’s exit. The numbers attending each successive protest have increased as the allegations have become more concrete.

Naftali calls himself a victim of institutional corruption and wants to elect a leader who wouldn’t need to be investigated by the police because he will be that transparent. There is tension brewing in the country, the protests are polarising society and those part of the anti-Likud party are being dubbed as anti-Semitic and Left-wing terrorists.

In the past year, the former staffer has been arrested, his accounts frozen and he has proved to be a sticky thorn on the side of Netanyahu, who he calls Goliath and refers to himself as David. And now he is considering entering politics and fighting an election.

Netanyahu has no obligation to abdicate his power, and seemingly has no intention to either, but chances of his re-election are fast dwindling. The Parliament of the country can remove him, but that seems unlikely. Moreover, it is the Attorney General of the country who can ask for the furthering of the investigation and eventually file formal charges against the PM. Recent reports suggest that Mandelbilt has shown a softer stance on the matter. He has been accused of dilly-dallying and delaying the case. While some reports suggest that he is waiting for a heavier case to be built up, those on the Left deny this. He has first allowed the courts to hear a petition filed by a Right-wing lawyer, demanding a gag order of the investigation.

What these revelations have done is given the Opposition teeth, a bark and now a bite. If Bibi is to abdicate office, this one move could drastically change the future of the Middle East.