India’s Lines of Credit lost its way? An Infographic

India in the past four years has deprioritised the African continent when it comes to its Line of Credit for infrastructural projects, which were mired in corruption and incompletion. Is PM Modi’s trip to East Africa a course correction?

Between 2002 and 2017, according to statistics released by EXIM bank on June 12, India’s credit lines have steadily grown to US $24 billion and currently amounts to 1% of its GDP. Of the total sum of the Lines of Credit (LoC) extended to all the countries in 15  years, 54% or US $13 billion has been offered in the last three years. These LOCs not just display India’s financial and diplomatic heft, but they also provide Indian companies an entry into new geographies. While these figures suggest emergence of ‘India’ as a major global and financial power, a closer look at the data tells another story. Besides two big-ticket credit lines to Bangladesh, the data reveals a worrisome trend that does not bode well for either Indian businesses or diplomacy. Worse it could give the country a bad name for the shoddy and corrupt manner the policy has been implemented.

LOCs were meant to take on the growing Chinese influence in Africa, but here, too, there is a steady decline in Indian credit, which till 2014 was the largest destination for Indian credit.

Perhaps it has to do something with the new strategy of the Narendra Modi-led NDA government when it comes to handing out ‘soft loans’ or ‘lines of credit’ to countries. In the past three years, there have been fewer loans, to fewer countries: larger eggs in fewer baskets, rather than many eggs in many baskets. This is vastly different from the previous government, which gave multiple small lines of credit to several countries keeping a consistent footprint of Indian businesses in African, Asian, Latin American and other countries. 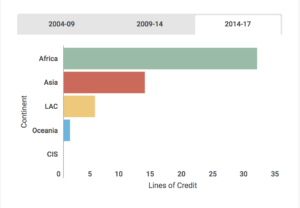 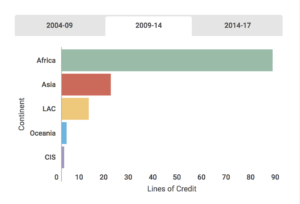 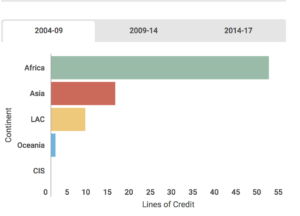 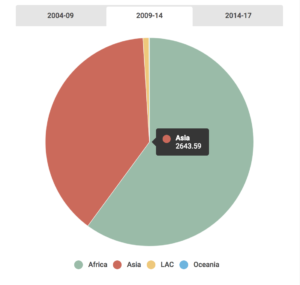 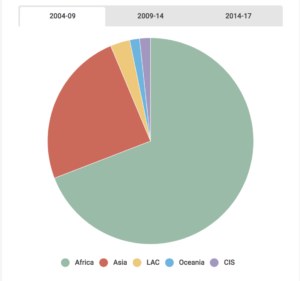 For instance, since May 2014,  18 projects have been signed in Africa amounting to US $ 1.5 billion.A disaggregated reading of these figures will show that US $500 million is given to Mauritius and Tanzania, which is a paltry sum in

comparison to the funds that China is sinking in the continent. The number of projects is even lower than the 46 signed between 2009-12 by the UPA (the first three years of its second term).

The largest portion of the LoC pie has been extended to Bangladesh. India has extended over US $ 7 billion to the neighboring country, out of which US $5 billion remain unsigned. India was outmatched by China’s ‘soft loan’ of $24 billion. Another worrying trend is the sheer number of LOCs that are still in the pipeline for nearly three years. Of the 29 unsigned deals, 21 unhappily belong to the Narendra Modi government. There are two possible causes for this, one is that Indian businesses are losing respect at the global scale and are no longer the preferred choice due to repeated charges of corruption and project delays. In Sudan there have been protests against the Indian companies carrying out the work on the Mashkour sugar plant> Charges of corruption and bribery have been levelled against Indian companies like Angelique International, which is currently undergoing an investigation by the Enforcement Directorate for their work in several African countries.

However, the gravest threat to Indian business in Africa and other geographies comes from a surging China. Their businesses in Africa dwarf that of the British, French and Indian investment combined. By 2025 the Chinese companies will generate revenue of up to US $ 440 billion from the African continent. Indian spending in Africa, through the medium of small loans has decreased substantially also in areas where Indian businesses were slowly and surely making inroads, with several large-scale projects in several countries such as Sudan’s Mashkour Sugar Plant , IT infrastructure or Industrial Parks. So in ways the fall in credit lines not just hurt India’s interest in these parts, but also suggests that we are ceding space rapidly to the Chinese.

It is possible to draw certain conclusions from the LoC data.  The three things are as follows: one, how willing are other countries in engaging with Indian businesses, secondly, how is the Indian government helping both public and private companies expand and enter newer markets in Africa and elsewhere and lastly, how successful are these loans in making friends at the international stage. Does more money disbursed means greater leverage at global meets and summits? The jury is still out whether they have succeeded in raising India’s profile. The flip side is that these loans entail high-interest rates, it has created a new set of problems of defaults like in the case of war-torn Syria.

India in the past four years has deprioritised the African continent when it comes to its Line of Credit for infrastructural projects, which were mired in corruption and incompletion. Is PM Modi’s trip to East Africa a course correction?
India’s Lines of Credit lost its way? An Infographic
​