Swadeshi Jagran Manch, one of the many appendages of the […]

Swadeshi Jagran Manch, one of the many appendages of the RSS, has been leading a campaign to cut down imports from China. At the heart of the matter are the outstanding diplomatic issues with Beijing pertaining to the border in the east and Beijing’s all-weather friendship with neighbouring Pakistan 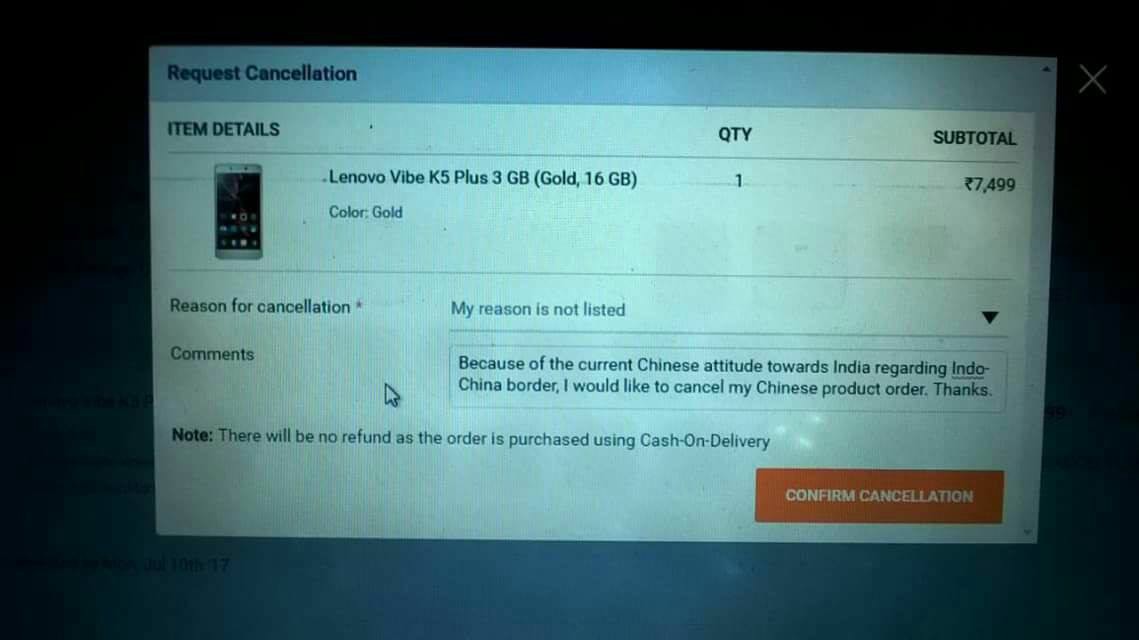 drive the point home, one of the Facebook pages of Swadeshi Jagran Manch shows an Indian soldier being gunned down by a Pakistani terrorist who has a number of people standing behind him in chronological order — a Pakistani soldier is holding the terrorist’s arm in which he has held an AK-47, behind the Pakistani soldier is a Chinese man dressed in suit (whose similarities to China’s President Xi Jinping is uncanny) and at last, there is an Indian urban guy with a bag full of Chinese products slipping currency notes into the pockets of the Chinese man. A red box urges people to “Boycott made in China” and a message at the bottom reads: If your purchase has a label that says made in China, you are contributing towards the manufacturing of nuclear weapons which are aimed at us.

The RSS affiliate is also rooting for the formulation of a law on the lines of Buy American Act to push people to buy Swadeshi goods.

Swadeshi Jagran Manch, the economic wing of Rashtriya Swayamsevak Sangh (RSS), has been leading a campaign to cut down imports from China. The crusade gathered steam around Diwali last year when the group conducted vigorous awareness drives to educate common people and retailers on why they should not buy and sell Chinese goods. The drive dealt a heavy blow to the sale of Chinese products in the market, causing the sales to decline by at least 60 percent, said a survey conducted by the Confederation of All India Traders (CAIT) in major cities. Since then, the Manch has also sent delegations from nearly 30 districts to persuade the Bharatiya Janata Party-led government at the Centre to cut down Chinese imports as much as possible. At the heart of the matter are the outstanding diplomatic issues with China pertaining to disputes over the border we share with the country in the east and Beijing’s all-weather friendship with neighbouring Pakistan.

The seat of the RSS’ economic wing in Delhi is nestled within the premises of a Shiv-Shakti Mandir in the southern part of the city. It is an open, airy space with ample sunlight and greenery. In keeping with the “Swadeshi” spirit of the organisation, switches on the switchboard are marked with the Hindi equivalents of lights and fans — deep for bulbs/tube lights and vyajnam for fans.

Dr Ashwini Mahajan, national co-convener of Swadeshi Jagran Manch and a professor of economics at the University of Delhi, says that the most important reason why the Swadeshi Jagran Manch has been urging people to shun Chinese products is that the country has alienated India time and again on international platforms. “It has blocked India’s bid to get Jaish-e-Mohammad chief Masood Azhar designated as a terrorist. It has opposed India’s membership of the Nuclear Suppliers Group (NSG) and it has colluded with Pakistan to build a corridor that passes through parts of Jammu and Kashmir that are under Pakistani occupation. China has also occupied our land in the east. It backs Pakistan, the country that has proved to be a major threat to our national security. Therefore, it does not make sense for us to engage in trade with a country like China at such a big scale,” he says.

According to Mahajan, the narrative has found resonance among Indian citizens and they have understood that if you look at the bigger picture, buying made in China goods amounts to sedition and is against the national interest. That sentiment, he says, was the reason why people came out in huge numbers to shun Chinese goods during Diwali last year. The Swadeshi Jagran Manch has also changed the name of the campaign from Rashtriya Swadeshi Abhiyan to Rashtriya Swadeshi Suraksha Abhiyan because it involves national security. They are also moving a resolution urging people to stop buying products made in China. With an aim to garner 3 crore signatures, the Manchis reaching out to people vociferously through meetings, protest marches and campaigns all across India and has managed to garner 87 lakh signatories. 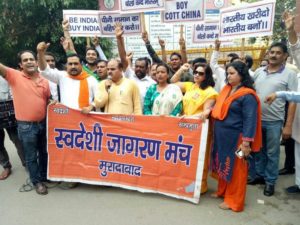 As India and China are engaged in a standoff over Doklam in Sikkim, the Manch has been intensifying a nationwide campaign against China-made products and Dr Mahajan’s Twitter page is witnessing profuse activity. He has put up a poll asking people if they agree that shunning Chinese products will deter China from troubling India on the borders. The economics professor and Swadeshi Jagran Manch leader says that trade with China has affected our domestic economy adversely.

“Our trade imbalance with China is huge. In 2015–16, we imported goods worth $61.7 billion and exported goods worth $9 billion. This imbalance increases our trade deficit and weakens the rupee,” notes Dr Mahajan. Fuelled by a patriotic sentiment at a time when nationalism is the buzzword, the campaign aims to use trade as a weapon against China. However, the idea seems to be wishful thinking when one considers that China’s exports to India account for only 2 percent of its total export.

China exports a wide variety of goods to India, ranging from electronic equipment, gadgets, telecom components, plastic goods, gems, precious metals, to ships and boats. Most of the goods that come from the country are value-added products, whereas India exports mostly raw materials to China. Beijing follows a policy of dumping, which means it exports products to other countries at a cost that is either below the cost of the product in the home market or below its cost of production. The purpose of introducing predatory pricing is to increase market share in a foreign market or to drive out the competition.

Translation: “If you want to see your country in the sky rather than on the ground buy Indian goods instead of foreign goods.”

The rampant sale and purchase of Chinese products in India is primarily because of the low prices at which they are available in comparison to goods made in India. Cutting down imports from China would also mean improving manufacturing capacity so that people can find cheaper alternatives in the market. Are we prepared to do that? “Yes, we are,” says Dr Mahajan. He thinks that if the government starts to push Indian enterprises under the aegis of Make in India and keeps cutting down imports from China, we will be able to improve our manufacturing capacity.

The RSS affiliate is also rooting for the formulation of a law on the lines of Buy American Act to push people to buy Swadeshi goods. “There is a trend all over the world where countries are now moving away from globalisation and focusing more on making themselves self-sufficient. Look at the United Kingdom which broke away from the European Union. When people all over the world are turning towards their own countries, why shouldn’t Indians do the same,” asks Dr Mahajan.

India, being a signatory to the Free Trade Agreement, cannot put a blanket ban on Chinese goods. How does the Manch then plan on dealing a blow to China’s trade interests in India? Mahajan thinks that the key to destroying China’s monopoly in the Indian market is to create awareness about the diplomatic issues between the two countries. A Rath Yatra, similar in grandeur to the one undertaken by LK Advani in 1992, is also underway in Uttar Pradesh to educate people on the issue via meetings and nukkad nataks. The journey will end with the burning of an effigy made of Chinese goods. The Swadeshi Jagran Manch leader says that the government certainly cannot impose a ban on Chinese goods. That, he asserts, will be done by patriots. “You should not underestimate the patriotism of the people of India. Despite the fact that Indian goods are costlier than their Chinese counterparts, Indians opt for the former. And they will bring down the sale of Chinese goods to zero,” says Mahajan.

Swadeshi Jagran Manch, one of the many appendages of the […]
Cornershop Nationalism: Say No! to Chinese Goods
​