India is frequently criticised for its heavy hand in Nepal, despite the geographic proximity, cultural similarity, economic interdependence and their shared political values. The special relationship, founded on the 1950’s Peace and Friendship Treaty, reached a low point when India imposed a de facto economic blockade against Nepal for five months from September 2015, at a time when millions of Nepalis were trying to rebuild lives and communities after the devastating earthquakes of April-May 2015. During the blockade, Nepal suffered a further humanitarian crisis as people were deprived of basics commodities like fuels and, medicines and cooking gas.

The blockade not only exposed India’s harsh actions to a new generation of young Nepali citizens but also undermined the goodwill that Indian Prime Minister Narendra Modi generated during his first visit to Nepal in 2014. China, at this time of hardship imposed by India, extended its help to Nepal to ease the situation. Perhaps at no other time in the past were so many Nepalis so strongly anti-India and in favour of deeper engagement with China. As Nepal sought an alternative supply source through refined diplomatic ties and forging of deeper cooperation in diplomacy, aid, investment and trade, to avoid overdependence on India, this episode brought Nepal and China much closer.

China’s interest in connectivity with Nepal goes back to the early 1960s when Arniko highway was constructed from the Tibet border to Kathmandu. What we see today is a dramatic expansion of Chinese economic engagement and infrastructure building in Nepal. Chinese companies are working on numerous development infrastructure projects, like widening the ring road in the capital city, building an international airport in Pokhara and constructing hydropower plants. Whenever Chinese companies are awarded infrastructure contracts, protests are few compared to the strong vocal calls for an annulment from nationalists and anti-Indian activists when Indian contractors win similar contracts. It may be because China does not seek to use aid and economic power to influence, or even dictate, the domestic politics of Nepal. 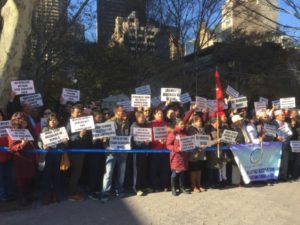 Nepalese Citizen protest against the Indian Blockade via wikicommons

Despite India providing economic aid to Nepal since the 1950s, China has been presenting itself as the benevolent power in direct contrast to the superior, almost imperial, attitude of India towards Nepal. There have been no serious tensions in the relations between Nepal and China since 1960. Chinese government officials repeatedly reassure Nepal that “China will never deviate from its policy of non-interference in the internal matters of Nepal.” This policy of non-interference has helped China retain supporters in all of Nepal’s political parties.

Since the 2008 Tibetan protest movement, security cooperation has grown hand-in-hand with increased aid and development of economic ties. China has been investing heavily in the Nepal Army and Armed Police Force

Since the anti-China protests of 2008 by Tibetans in Kathmandu, China’s Nepal policy has undergone a sea change. China has significantly scaled up its economic and diplomatic engagement with Nepal. Today, Beijing’s policy towards Nepal appears to be driven by the twin objectives of expanding influence in Nepal and suppressing anti-China activities of the estimated 20,000 Tibetans residing in Nepal. Nepal has committed to the One-China policy and accepts Tibet as part of China. A stable Nepal is in China’s interests as far as Tibet is concerned.

Since the 2008 Tibetan protest movement, security cooperation has grown hand-in-hand with increased aid and development of economic ties. China has been investing heavily in the Nepal Army and Armed Police Force. In recent years, the Chinese People’s Liberation Army and the Nepal Army have established a military assistance programme, including the supply of non-lethal equipment, training, infrastructure development and the exchange of high-level delegations.

Beginning a new level of bilateral military engagement, Nepal held its first ever joint military exercise with China earlier this year, marking an extension of the Nepal Army’s military diplomacy. The Nepal Army has long been conducting joint military drills with the Indian and American armed forces. The 10-day-long non-threatening joint exercised focused on counter-terrorism. It is important to remember that India, the biggest provider of military assistance to Nepal Army, had halted military supplies to Nepal in 2005 when the Nepal Army was fighting against Maoist insurgents. It resumed military assistance only in 2013. China is also increasing its help to the army. The visiting state minister this year announced 300 million Yuan (Rs 4.5 billion) in military aid to the Nepal Army.

China recently constructed and handed over a training academy building to Nepal’s Armed Police Force (APF). The building was constructed by the Chinese government at the cost of Rs 3.6 billion and was completed in two years. The APF officers have been guarding the Nepal-Tibet border to stop the infiltration of Tibetans into Nepal. Interestingly, in 2014, India signed a MoU with Nepal to construct the National Police Academy for Nepal Police; however, three years have already elapsed with no progress made. India is pushing for involvement in all aspects of the project, including the appointment of consultants, preparation of the master plan, construction of infrastructure, and mobilisation of expenditure. China built the APF training academy without this kind of involvement from India.

A developing country, landlocked between India and China, Nepal sees its expanding relationship with China not just as an opportunity for much-needed economic development and foreign direct investment and aid but also as a way to counterbalance its traditional dependence on India. China’s trade with Nepal still lags behind India’s, but the gap is narrowing. China has emerged as one of the top five bilateral donors to Nepal in the fiscal year 2014–15 in terms of funds disbursed. China was the fourth largest bilateral donor behind the United Kingdom, the United States and Japan and was followed by Switzerland. This is the first time in the past five years that India is not in the list of top five official development assistance 5 (ODA) providers (in terms of disbursement) among Nepal’s bilateral development partners.

The five-month blockade imposed by India pushed Nepal to open its northern borders with China for trade and gave China an opportunity to further expand its role in Nepal. Last year, in March, Nepal and China signed a trade and transit treaty, allowing Nepal to use Chinese ports, marking an end to the landlocked country’s dependency on the port of Kolkata and the Indian road network for international trade.

Nepal is a darling of western donors and receives relatively high-levels of bilateral and multilateral aid. China is not a member of the Organisation for Economic Co-operation and Development (OECD) and does not follow its definition or practice of development aid. The bulk of Chinese financing in Nepal falls under the category of development finance and not aid. The millions of dollars that China commits to Nepal are repayable, long-term loans. China’s aid and development financing fills a void left by the West and promotes the development of Nepal’s infrastructure. Many Chinese projects in Nepal require a large investment and long pay-back terms that the Himalayan country’s and Nepal’s traditional donors are reluctant to provide.

While India might not choose to match the Chinese largesse, greater generosity in its dealings with its smaller neighbours can win it more friends and create goodwill throughout the region

Ignoring India’s reluctance, Nepal signed a framework agreement to join China’s Belt and Road Initiative (BRI) in May this year, marking Nepal’s official move to become a part of Beijing’s ambitious plan to revive ancient Silk Road trade routes. Nepal is optimistic that investment on road and railway connectivity will bring big gains. One such project is the proposed Kerung-Kathmandu-Pokhara-Lumbini railway, a connecting cross-border railway line. This is regarded as a potential game-changer in terms of trade relations and geopolitics in the region. Nepal’s participation in the BRI would help foster economic aspirations and stability without the fear of another blockade on the southern border of the country.

China has been deepening its engagement in Nepal in the social and economic sectors. Nepali politicians, professionals, military leaders, business persons, journalists and young people are increasingly being invited to China for seminars, consultations and pleasure visits. Likewise, Chinese tourist arrivals in Nepal have grown at an average of nearly 25 percent every year over the last few years. China is also encouraging more of its citizens to visit Nepal and has announced 2017 will be “Nepal Tourism Promotion Year.” Compared to the 2009 figures, the number of Chinese tourists visiting Nepal in 2013 had increased by 250 percent.