Towards a world free of nuclear weapons

The international community at the UN voted for independence from […]

The international community at the UN voted for independence from nuclear weapons on July 7 with an overwhelming majority. In an exclusive article, Brazil’s Foreign Minister Aloysio Nunes Ferreira writes on the various aspects of the treaty and its significance in the fight to abolish nuclear weapons

OnJuly 7, the international community took a historic step when it adopted the text of the United Nations Treaty on the Prohibition of Nuclear Weapons after negotiations that would not have been possible without the leadership of a group comprised of Brazil, South Africa, Austria, Ireland, Mexico and Nigeria.

These countries were joined by a great majority of the United Nations Member States who understood the humanitarian dimension of the initiative and actively participated in the negotiating conference with constructive spirit and responsibility in order to fill an unacceptable legal gap in the field of disarmament.

The other weapons of mass destruction — chemical and bacteriological — had already been banned by legally-binding instruments, but nuclear weapons, the only one capable of destroying life on the planet, lacked a prohibition treaty. This gap, which we now begin to overcome, will finally cease to exist when the new instrument reaches the required 50 ratifications for its entry into force.

The agreement was a victory for the United Nations and multilateralism, according to which dialogue among states is the most adequate and legitimate way to find solutions to global problems. The instrument draws on previous conferences that have helped to raise governments’ and societies’ awareness of the impacts of the detonation of a nuclear weapon whose indiscriminate destruction is inconsistent both with the rules of humanitarian law governing the states’ conduct of hostilities and with the very notion of human dignity.

Despite the resistance from Nuclear-Weapon States (NWS), it was possible to adopt a treaty that reflects the historical aspiration of the large majority of the international community to ban the existence of such weapons. Moreover, the new Treaty is an important complement to Article 6 of the Treaty on the Non-Proliferation of Nuclear Weapons (NPT) which established the obligation of nuclear disarmament. 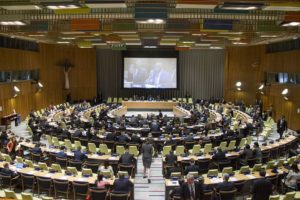 This unprecedented step must be ascribed to the persistence of those who for the last 70 years have kept alive the hope of a world without nuclear weapons; to a diverse and plural coalition of governments and civil society actors who have not resigned themselves to the existence of such weapons.

Brazil is proud to integrate this coalition, including in view of the constitutional mandate. For this reason, Brazil has given its contribution by helping to convene the negotiating conference and undertaking efforts to overcome obstacles that could have thwarted the initiative.

Today we can celebrate this victory of humanity in the search for a world free of the absurdity of nuclear weapons. It is a moment of rejoicing, rather than one of self-congratulation. We are aware that the path towards the universalization of the Treaty will be long and will require enduring efforts of persuasion.

In addition to constituting an ethical and moral duty, the prohibition of nuclear weapons will help undo the justification for maintaining the current arsenals. Therefore, it has a clear political significance as it legitimises the fight for disarmament, particularly in nuclear-armed states.

In a world marred by conflicts and tensions, the Treaty is a fresh breath of air, demonstrating that with courage and goodwill it is possible to build a better, fairer, more rational and secure world for present and future generations.