‘Parliamentary democracy has been smothered in Maldives’

In the backdrop of an escalating political crisis and a purge initiated by Maldives’ President Abdulla Yameen Abdul Gayoom, former speaker of the People’s Majlis, Abdulla Shahid, speaks to Hardnews about the island nation’s growing proximity to China and the plight of its democratic system 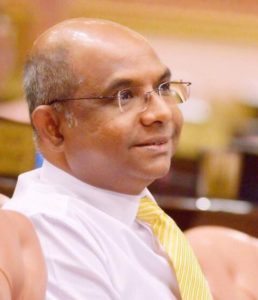 In the backdrop of an escalating political crisis and a purge initiated by Maldives’ President Abdulla Yameen Abdul Gayoom, former speaker of the People’s Majlis, Abdulla Shahid, speaks to Hardnews about the island nation’s growing proximity to China and the plight of its democratic system. Shahid, who played a key role in the Maldives’ transition to democracy in 2008, sounds an ominous warning for Maldives’ current regime which is indulging in a dangerous power play by pitting India against China. He also deliberates on how parliamentary democracy is being smothered in the Maldives, recounting his own experience of being prosecuted for entering Parliament, and stresses on the role the Opposition can play in challenging the prevailing narrative.

Excerpts from the interview:

We continue to see India as an important country for stability in the region. We are mindful that the government of President Gayoom is taking irresponsible steps in our foreign policy that are not conducive to a peaceful environment in the Indian Ocean region. In the last four and a half years, this government has antagonised all our friends by getting into all kinds of conflict areas and then taking sides. It is not in our national interest to play powerful countries against each other, as we have done by pitting India against China and by trying to leverage Maldives’ strategic location.

How can we forget what India has done for us? They came to our rescue when an armed LTTE group tried to capture our island. It was India that sent in its forces to throw them out. Then India helped Maldives post-tsunami in providing relief and in reconstruction. More recently, there was a major water crisis and India was quick to fly in help and assistance. India is our closest neighbour and has always been ready to come to our help in times of crisis, then why are we playing these games. My party is extremely concerned about the haphazard manner in which Maldives’ foreign policy is being pursued.

On growing proximity with China

In the last four and a half years of being in power, President Gayoom has been accused of large-scale corruption, money laundering and serious violations of human rights. There have been suggestions of large-scale pay-offs as shown in the Al Jazeera documentary Stealing a Paradise. PresidentGayoom is uncomfortable with India due to its rule of law and democratic accountability. Do you think that India can give a few million dollars toGayoom without being accountable to many of its supervisory bodies?

Gayoom did not want this kind of situation here. The first thing that he did was to amend the Public Finance Act and gave his office extraordinary powers to decide on how the money was to be spent. The Opposition parties or the Public Accounts Committee of the Parliament were denied access to any of these accounts. We have no idea about whether this government has given sovereign guarantees to any company in the contracts that have been signed with the Chinese government. We have no clue about our national debt. We only know that a lot of money has been syphoned off from many of these projects.

China has been a good friend of Maldives, but the money that this government has been borrowing from them is unaccountable. I will be happy if the Chinese government in their crackdown on corruption also comes down strongly on many of their companies investing here.

In fact, a joint Opposition has written to the Chinese ambassador that these deals that are linked to corruption and payoffs should be probed. Maldivians are being prevented from airing their grievances to foreign diplomats. Recently, the Indian ambassador met four elected officials and they have been barred from entering the Council. They have no jobs now.

President Gayoom has no support in the country and he is using these tactics to scare the Opposition through his crooks. Despite his efforts to reduce the stature of the Opposition, the joint Opposition won the local elections. In free and fair elections, Yameen will lose badly. We want the Indian government to ensure that. It is a difficult situation for the Maldives as most of the Opposition leaders are in exile.

In the backdrop of an escalating political crisis and a purge initiated by Maldives’ President Abdulla Yameen Abdul Gayoom, former speaker of the People’s Majlis, Abdulla Shahid, speaks to Hardnews about the island nation’s growing proximity to China and the plight of its democratic system
‘Parliamentary democracy has been smothered in Maldives’
​