Turkey’s Economy Czar Fails to Save the Lira

With the Turkish lira caught in a downward spiral, millions in Turkey tuned last Friday into the long-anticipated speech of Berat Albayrak, the country’s newly minted economy czar and son-in-law of President Recep Tayyip Erdogan. Addressing the restless business community, Albayrak revealed his “new economic plan” aiming to put the breaks on the lira’s precipitous drop and restore economic confidence in Turkey. Instead, the lira plunged even further. Ankara blames this on a provocative tweet by U.S. President Donald Trump, but the economic mess is one that Erdogan created. 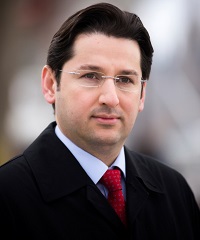 Albayrak’s “new economic plan” for Turkey failed to impress his audience. Filled with vague and insubstantial comments, the speech emphasized the need for an independent monetary policy and “skilled human capital,” two problems that track back to his father-in-law’s failed economic policies. Not only did Albayrak fail to produce an actual “plan,” his immature demeanor during the speech only further alarmed the country’s anxious business community. Then President Donald Trump’s tweet announcing the doubling of U.S. tariffs on Turkish steel and aluminum pushed them over the edge.

Erdogan and his government blame the currency crisis on an “economic war” launched by the United States on Turkey. But the lira is dropping because of a real-estate bubble and overheated the economy. Meanwhile, Erdogan’s unorthodox economic theories, such as his efforts to combat inflation by lowering interest rates and incessant interventions to the central bank, have brought investor confidence to historic lows.

Amid Turkey’s mounting foreign debt and plunging confidence, Erdogan further rattled the markets this summer by appointing his son-in-law as the minister of finance and treasury. Few believe that Albayrak has the skillset to mitigate the expected crisis: Leaked documents suggest that his PhD dissertation on financing renewable energy projects was authored by his academic adviser, whom Albayrak rewarded by appointing to the board of the Istanbul Stock Exchange.

This week’s meltdown also comes amid new U.S. sanctions under the Global Magnitsky Act against two Turkish officials – the ministers of justice and the interior – for facilitating the wrongful detention of U.S. citizens and diplomatic staff in Turkey. Congress is also seeking to halt the sale of F-35 jets to Turkey in response to Erdogan’s intention to buy the S-400 missile defense systems from Russia, and is weighing a bill that could block loans to Turkey.

In response to these measures, Erdogan has vowed to fight against the so-called “economic war” on his country, asking his constituency to sell their dollars and euros, and consoling them, “If they have their dollars, we have our Allah.” With control over 90 percent of the Turkish media, his message is amplified. But many Turks are not buying it. And neither is Washington, where the message has been consistent: While Erdogan’s diplomatic row with the U.S. has not caused the current economic crisis, ending that spat could be a first step in putting the Turkish economy back on track.

Aykan Erdemir is a former member of the Turkish parliament and a senior fellow at the Foundation for Defense of Democracies, where Merve Tahiroglu is a research analyst.

Disclaimer: The opinions expressed within this article are the personal opinions of the author. The facts and opinions appearing in the article do not reflect the views of HNFP and HNFP does not assume any responsibility or liability for the same.