Raphael Nadal is Wimbledon 2017’s first big exit and that […] 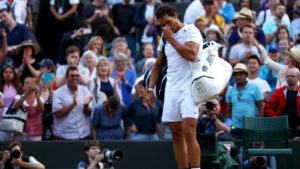 In 2005, twelve years ago, Rafael Nadal won his first grand slam at the Roland Garros. A month later, the new, sensational French Open champion crashed out of Wimbledon, losing to a relatively unknown player from Luxembourg in four sets. In events that could only feel like Deja Vu for the Spaniard, after winning on clay Championship a fortnight ago, for the tenth time, he hoped to carry that into Wimbledon, but his run was ended by the same player from Luxembourg. On Monday night, Gilles Muller, as he had done twelve years ago, ended Nadal’s run at Wimbledon in an epic marathon match.

Pulling off the biggest upset of the tournament yet, Gilles Muller beat the 15-time Grand Slam winner 15–13 in the final set. The entire match lasted for a gruelling four hours and forty-eight minutes, the scorecard at the end read 6–3, 6–4, 3–6, 4–6, 15–13. The back and forth left the audience of 16,000, screaming for both players at different times, needless to say, the game was a treat that left everyone at the edge of their seats. Nadal’s exit prolongs his drought at Wimbledon — he’s without a quarterfinal berth at the All England Club six-years in a row. All of the losses, except for this one, came at the hands of players seeded 100 or higher.

Muller made the most of the Nadal’s backhand errors and much to the surprise of the crowd was two sets up in no time. The number four seed had come through to this juncture with three easy rounds but now looked nervous as Muller set to work cutting short his reaction time by moving in and taking more half-volleys, forcing him to commit errors. Nadal’s ability to not get tired means that he can start a match in the third set, and at the start of the third set he came out with his trademark two-feet bounce. He moved fast on the court, running high on his aggressive body language. And as his endurance gave dividends, out came his trademark celebration, he jumped, pumped his fists in the air and roared ‘Vamos’ after winning long rallies and decisive points. On the other hand, Muller remained calm and held his nerve till the match entered the fifth set.

The match tied at 6-all in the fifth, a sense of predictability began to set in. There is a sense of comfort in how big players pull things together in extreme pressure situations and this was again on display as large parts of the crowd cheered Nadal on hoping for a victory for the Spaniard. Feeling the intensity, he fought back from the unfamiliar place of being on the verge of defeat, in the process, saving two match points. Muller had to wait for another one hour ten minutes for his third match point. Nadal, in no mood to give up, made Muller wait one-hour-ten-minutes for his third match point. The fourth seed pushed the game to the baseline, his lightening movement on the court, however, could not keep Muller at bay, but ended up prolonging the inevitable as he took his serve to make it 10-all.

The crowd randomly switched loyalties; chants were heard in favour of both and Mexican waves were seen in support. As Novak Djokovic waited for his match to begin, he was a silent witness to the exit of a serious contender for the title. He must have been grateful, in a year that hasn’t been kind any luck is good luck. to start, the duo were not in a mood to give up. Muller won his serve comfortably and went on to lead the set by 14- 13. Nadal started his serve with a volley into the net and did two more errors handing Muller another match point. He had evaded four match points earlier but couldn’t do anything about the fifth one. Muller didn’t scream or celebrate; he raised his arms and smiled. The mission was over, Muller has made into his first Quarterfinal at the Wimbledon.