As North Korea continues to flex muscle, US and Japan […]

As North Korea continues to flex muscle, US and Japan vow to work more closely to counter the threat emerging from Pyongyang 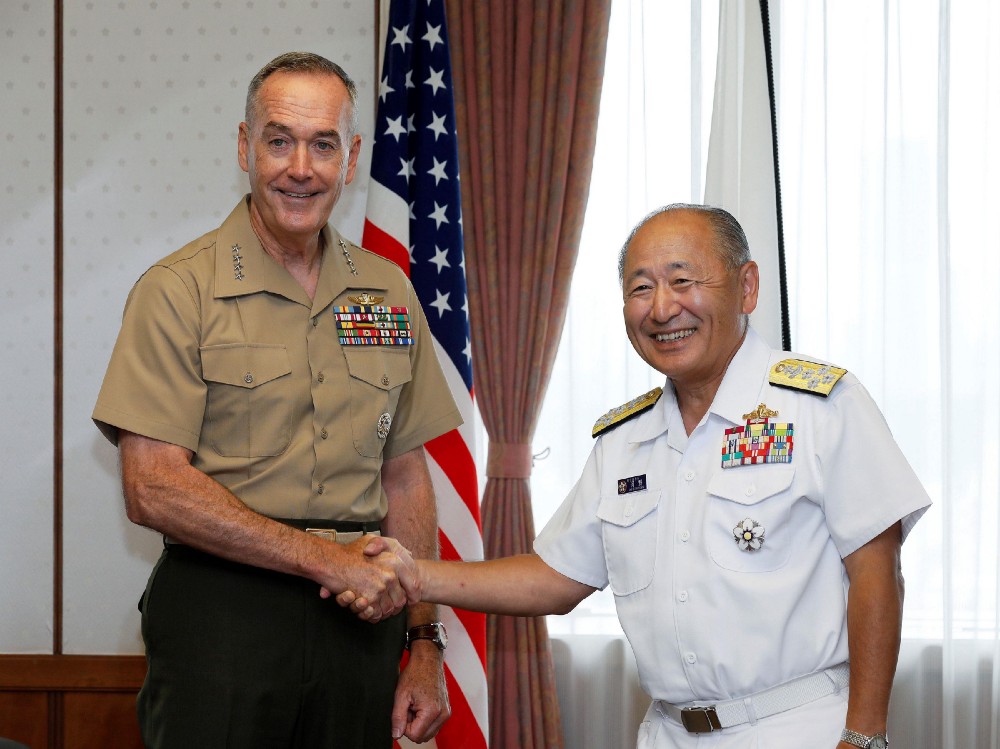 General Joseph F Dunford, Jr, US Chairman of Joint Chiefs of Staff, shakes hands with Japan’s Chief of Staff of Joint Staff Katsutoshi Kawano (right) at the start of their talks at the Defence Ministry in Tokyo, Japan, on August 18. Credit: UNI

A top US general repeated Washington’s “ironclad commitment” to the security of its close Asian ally, Japan, on Friday amid regional tensions over North Korea. US Joint Chiefs of Staff Chairman Joseph Dunford told his counterpart in Tokyo that “an attack on one is an attack on both of us.”

“The most important thing it (the ministers’ meeting) did was reaffirm the primacy of our bilateral relationship here in Asia-Pacific,” Dunford said at the start of a meeting with the Chief of Staff of Japan’s Self-Defence Forces, Admiral Katsutoshi Kawano.

Fears about North Korea’s missile and nuclear weapons programmes have grown in recent weeks. Pyongyang has said it was considering plans to fire missiles over Japan towards the US Pacific territory of Guam, although North Korean leader Kim Jong Un appears to have delayed the decision.

US Defence Secretary Jim Mattis, Secretary of State Rex Tillerson and their Japanese counterparts agreed at a meeting in Washington on Thursday to work more closely on North Korea.

Tillerson said in Washington that the United States wanted dialogue with Pyongyang, but only if it were meaningful. “Our effort is to cause them to want to engage in talks but engage in talks with an understanding that these talks will lead to a different conclusion than talks of the past,” he said.

In 2005, North Korea reached an agreement with six countries to suspend its nuclear programme in return for diplomatic rewards and energy assistance but the deal later collapsed.

Tensions have risen after North Korea conducted two missile tests in July which, like its five atomic bomb tests, were carried out in defiance of international pressure and United Nations resolutions.

US President Donald Trump has vowed not to allow North Korea to develop nuclear missiles that could hit the mainland United States but Pyongyang sees its nuclear arsenal as protection against Washington and its partners in Asia.

Dunford said on Thursday the United States and South Korea would go ahead with joint military drills next week despite pressure from North Korea and its main ally, China, to halt the contentious exercises that Pyongyang routinely describes as preparation for war.

North Korea has fired missiles and taken other steps in response to the war games in the past.

Trump warned North Korea last week it would face “fire and fury” if it threatened the United States, prompting North Korea to say it was considering plans to fire missiles toward Guam.

Both sides have since tempered their rhetoric somewhat, but with North Korea’s military capabilities growing, Japan has been looking to strengthening its defences.

“We will absolutely help and what’s most important for ballistic missile defence is that we integrate our capabilities,” Dunford said.

Foreign Minister Taro Kono said in Washington that Japan would strengthen its defence posture in response to the North Korean threat and provide $500 million to help boost maritime security in East Asia, where China has been pursuing extensive maritime claims that have angered regional neighbours.

Japan is likely to increase its defence spending at a faster pace in its next five-year plan from April 2019 than the annual 0.8 percent average rise in its current mid-term plan, the Nikkei business daily reported on Friday. Defence officials have said such a rise was desirable but finance ministry officials are cautious because of Tokyo’s mammoth public debt.

North Korea has repeatedly threatened to target Japan, which hosts around 54,000 US military personnel, as well as South Korea and the United States with its missiles.

The United Nations earlier this month approved tough new sanctions against North Korea in response to its missile tests, which include a ban on North Korean seafood exports.

China, North Korea’s largest trading partner, has vowed to enforce the new sanctions, as it has done with previous ones, and says it’s ready to pay the price.

State-run Chinese newspaper the Global Times said on its website late Thursday that authorities in the Chinese border city of Hunchun were negotiating with North Korea about the fate of seafood trucks stuck between the two countries’ customs ports.

“The seafood that can’t enter China is ready to be gradually shipped back to North Korea,” a Hunchun official told the paper.

With inputs from Reuters via UNI

As North Korea continues to flex muscle, US and Japan […]
US reiterates ‘ironclad commitment’ to defend Japan from North Korean attack
​