BRICS takes a stand against terrorism

In the two day summit of the fastest, emerging economies […]

In the two day summit of the fastest, emerging economies in the world, all eyes are on economic cooperation and open borders 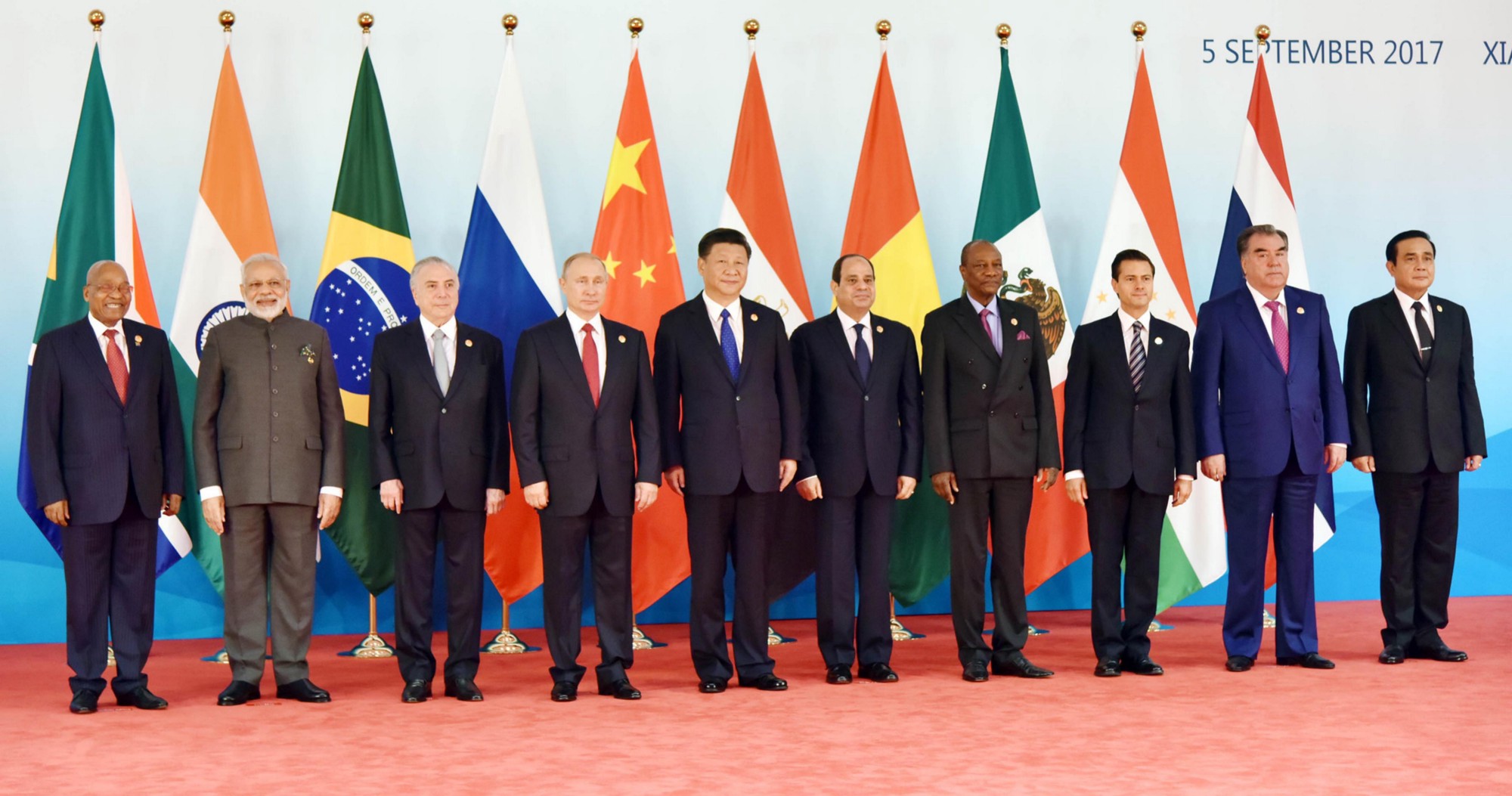 Against the backdrop of a nearly three-month long standoff between India and China in Doklam sector, five major economies opened the 9th BRICS summit in Xiamen, China. Centred around the theme of ‘Stronger Partnership for a Brighter Future’. The session began with a warm handshake between Prime Minister Modi and Chinese President Xi Jinping along with Russian President Vladimir Putin, Brazilian President Michel Temer, and South African President Jacob Zuma. Observer countries such as Thailand, Mexico, Egypt, Guinea, and Tajikistan will also attend.

In his address, Modi pitched for a strong BRICS partnership on innovation and said the digital economy can help spur growth and also support the sustainable developmental goals. Mr Modi emphasised the need to accelerate track of cooperation in smart cities, urbanisation and disaster management. “We need to mainstream our youth in our joint initiatives; scale up cooperation in skill development and exchange of best practices,” the Prime Minister said and also maintained that the BRICS countries can work closely with International Solar Alliance (ISA) to strengthen the solar energy agenda.

Chinese President Xi Jinping told the Brics business leaders and senior officials in a speech on the first day of the meeting that, “We should push for an open world economy, promote trade liberalisation and facilitation, jointly create a new global value chain, and realise a global economic rebalancing.The development of emerging markets and developing countries won’t touch anyone’s cheese, but instead will diligently grow the world economic pie.” Xi Jinping also told other member nations that there is utmost importance for closer ties between BRICS members and said five countries need to play a more active role in world governance. “Without us, many challenges cannot be effectively resolved,” he said. On the occasion, Chinese President said that his country will soon unveil an economic cooperation plan for the BRICS countries.

Officials will discuss a ‘BRICS Plus’ plan to possibly expand the bloc to new members. Among the observers, Mexico’s President Enrique Pena Nieto is set to be in China to discuss trade and investment, as U.S. President Donald Trump has renewed threats to scrap the 23-year-old North American Free Trade Agreement (NAFTA) that he has labelled a killer of U.S. jobs. “We expect to reach consensus for actions in support of the multilateral trade system and oppose trade protectionism,” Vice Commerce Minister Wang Shouwen told a briefing ahead of the opening ceremony for a BRICS business meeting
China expects Indian Prime minister not to raise Pak terrorism issue at BRICS Summit and has sent out a clear message that it would object to any discussion about Pakistan’s alleged role in sheltering terrorists during the BRICS Summit. “We also noticed that India when it comes to Pakistan’s counter-terrorism has some concerns. I don’t think this is an appropriate topic to be discussed at BRICS Summit,” said Hua Chunying, Chinese Foreign Ministry spokesperson. “Pakistan is at the forefront of counter-terror efforts and has made sacrifices for this. The international community should recognise the contributions and a sacrifice made by Pakistan.China is willing to work with Pakistan and other countries to enhance our cooperation in counter-terrorism. This serves the common interest of all parties,” she added.

On the second day of the meet, BRICS leaders express concern about the security situation in the region, and violence by terror groups such as the Taliban, al-Qaeda and Pakistan-based LeT and JeM. The BRICS leaders have condemned terrorist attacks worldwide, including those in BRICS countries. They condemned terrorism in all forms and manifestation wherever committed and by whomsoever and stress that there can be no justification for any act of terror. They reaffirmed that those responsible for committing, organising, or supporting terrorist acts must be held accountable.

Modi further is said, “BRICS has developed a robust framework for cooperation; it has contributed to stability and growth in a world drifting towards uncertainty.” He adds that cooperation is important for peace and development and will be an instrument for progress. Modi held talks with Russian President Vladimir Putin and discussed ways for boosting bilateral trade and investment, especially in the oil and natural gas sector. In the meantime, Russian President Vladimir Putin spoke to Japanese PM Shinzo Abe regarding North Korea’s nuclear missile test. North Korea on September 3, claimed to have successfully tested its sixth and most powerful nuclear missile.

BRICS was formed as an association of fast-growing large economies to advocate for better representation for developing countries and seeks to end the monopoly of the Western-dominated world order. In his address, PM Modi said that trade and economy were the foundations of the cooperation among BRICS and called for the creation of a BRICS rating agency to cater to financing needs of sovereign and corporate entities of developing countries. BRICS as a bloc has developed a robust framework for cooperation and contributed to the stability in a world “drifting towards uncertainty,” he said. PM Modi said that central banks of BRICS countries must further strengthen their capabilities and promote cooperation between the Contingent Reserve Arrangement and the International Monetary Fund. Prime Minister said the women’s empowerment programs are productivity multipliers that mainstream women in nation building and said the cooperation amongst BRICS touch diverse areas of agriculture, culture, environment, energy, and sports. “We are in mission-mode to eradicate poverty; to ensure the health, sanitation, skills, food security, gender equality, energy, and education. India would be happy to work towards more focused engagement between BRICS and African countries in areas of skills, health, infrastructure, and manufacturing,” he said.

In the two day summit of the fastest, emerging economies […]
BRICS takes a stand against terrorism
​