China is selling dreams for a price — greater influence over the […]

Among one of the many things that China’s growing influence over Nepal has done to its people is that it has created the chimera of a better life, something ordinary people should aspire to. This product called hope is sold from every street corner, but for a price — learn Chinese. Along the scenic road flanked by lofty mountain peaks that welcome tourists arriving at the Tribhuvan International Airport, it is impossible to miss the pamphlets at every road crossing, on the walls adjoining pavements and on electric poles, exhorting people to learn Chinese, never mind that the language is touted to be the world’s most difficult by linguists. The idea is to enable the young Nepalese generation to go abroad and study in Chinese universities on scholarships. A journalist based in Nepal’s capital city, Kathmandu, says that many a time Nepalese students attend Chinese universities, but the medium of instruction for them is Nepalese.

Ask people in Kathmandu if this should bother India, and the reply is terse: “You’d be a fool not to be worried.” In New Delhi, the news of a pre-poll alliance between the Communist Party of Nepal-Unified Marxist-Leninist (CPN-UML) and the Communist Party of Nepal-Maoist Centre (CPN-MC) in October had evoked much anxiety. It marked the coming together of former Prime Ministers K.P. Oli and Pushpa Kamal Dahal, better known as ‘Prachanda,’ and prompted newspaper editorials to unanimously point fingers at China and issue ominous warnings about an ‘aggressive’ Beijing.

In Nepal, however, the alliance received a mixed response. For some, it was a relief because it promised to reduce the number of parties in the small Himalayan nation. As a bookshop owner in Kathmandu’s Thamel area, Manoj, said, “It’s for the best. We have more politicians than required to represent the 29 million people living here. Too many cooks spoil the broth.” But the development was also viewed by many others with caution, especially because the Communists’ poll campaign relied heavily on attacking the country’s religious institutions. In a country where 90 percent people are Hindus, the campaign has drawn home the realisation that voting for Communists could endanger their religious identity and culture.

India’s paranoia
The moment one sets foot in the lobby of Shangri La Hotel, one knows that someone important has arrived. People seated in chairs and chit-chatting a while ago straighten up to shake hands with a man dressed in a black suit and a matching Nepali topi (cap). Dr Shekhar Koirala, a member of the ruling Nepali Congress (NC) and an MP from Morang district in east Nepal, is widely regarded as a man whose wisdom appeals to leaders cutting across party lines. In person, he is an old, frail-looking man with a patient visage that gives one the impression that one will be heard and understood. On being told about India’s reaction to the recently-formed Communist alliance, Dr Koirala looks amused. “If that is true, why didn’t India do something to stop it before it happened?” he asks, adjusting his spectacles on his wrinkled face with a wry smile. 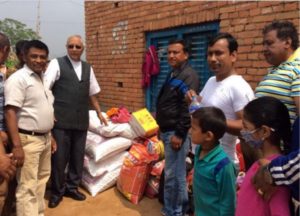 China is selling dreams for a price — greater influence over the […]
Has Nepal’s left unity created space for China?
​