China’s ambitions have caused nervousness in some countries, particularly India […]

China’s ambitions have caused nervousness in some countries, particularly India and in some European capitals, which suspect Beijing of using the plan to promote Chinese influence globally

China’s defence ministry clarified today that in its ambition to build a new Silk Road, the nation is not seeking to expand its military role abroad or trying to set up foreign bases.

The new Silk Road, formally known as the Belt and Road initiative in China, is President Xi Jinping’s signature policy to expand links between Asia, Africa and Europe underpinned by billions of dollars in infrastructure investment.

At a summit in Beijing this month, Xi pledged US$124 billion for the plan, promising to forge a path of peace, inclusiveness and free trade. 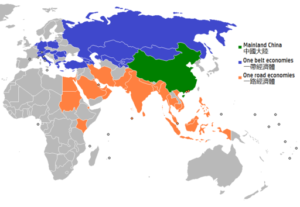 By Tart, via Wikimedia Commons

But China’s ambitions have caused nervousness in some countries, particularly India and in some European capitals, which suspect Beijing of using the plan to promote Chinese influence globally, pointing to investments in ports in places such as Pakistan that could one day be used by China’s navy.

The new Silk Road is about cooperation and trade, he told a regular monthly news briefing.

“The Belt and Road initiative has no military or geostrategic intent. China is not seeking the right to guide global affairs, or spheres of influence, and will not interfere in the internal affairs of other countries.”

Still, China has been building a military base in the Horn of Africa country of Djibouti that will be its first overseas naval base, though officially described as a logistics facility.

Djibouti’s position on the Indian Ocean’s northwestern edge has fuelled worries in India that it could join China’s “string of pearls”, or military alliances and assets ringing the south Asian nation, including Bangladesh, Myanmar and Sri Lanka.

More than reaffirming China’s position as a world superpower, the real value of the OBOR initiative could be the soft power it will afford to the world’s second-largest economy.

The US$46 billion China-Pakistan Economic Corridor (CPEC), which has irked India because it passes through parts of Pakistan-occupied Kashmir (PoK), faces terrorism and security risks. Pakistan has deployed around 15,000 security personnel for the safety of Chinese employees working on the corridor. However, the security risks to the new transportation route continue. It is noteworthy that the increased security cooperation between Pakistan and China is taking place at a time when tension between India and China and India and Pakistan has been growing.