Behind the call for a ban of the dumpling lies […]

In Jammu, a legislator from India’s ruling Bharatiya Janata Party has taken it upon himself to lead an agitation over the excessive consumption of momos by the youth in the State. He likens the popular snack to a ‘drug’ that is killing the Indian youth slowly. He alleges that the usage of monosodium glutamate (MSG) or Ajinomoto is bad for health. Ironically, his agenda is based on misinformation: the Food and Drug Administration in the USA has said that it is ‘generally recognised as safe’

What then lies behind this attack on a popular street food?This so-called movement against the popular snack is largely a cover for a xenophobic agenda: a large number of migrants from Burma, Bangladesh and Nepal are often associated with the trade of selling dumplings. Since the barrier to entry is virtually none, most economically disenfranchised migrants end up selling these snacks as a means of earning their livelihood. 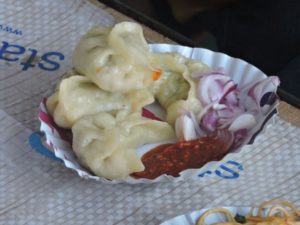 In Jammu, there has been a covert agenda to not allow refugees and migrants economic opportunities. There are 5,743 Rohingyas Muslims from Myanmar living and working in Jammu, who are also broadly clubbed in with the Bangladeshis. In addition, there are 7,690 Tibetans working in the Ladakh region of Jammu. In April, the President of the Jammu Chambers of Commerce and Industry, Rakesh Gupta, according to reports in a daily newspaper, had threatened to ‘identify and kill’, the Rohingya community in the State.

There has also been a concerted movement to evict the Rohingyas from Jammu. BJP legislators in Jammu have been filing PILs to evict the community from Jammu on the grounds of them participating in anti-social activities. In the time between February and May 2017, legislators from the BJP have tried to create a narrative around the Rohingya as ‘being threats to the security of the country and the region’.

This new effort to slowly malign their source of livelihood will lead to further marginalisation of the community in the State, leaving them with no other option but to move to other parts of the country, where once again one suspects they will be witch-hunted and ostracised.

Behind the call for a ban of the dumpling lies […]
Momophobia? Xenophobia?
​