Foreign Reserves Beyond a Point are Pointless

Clearly the Indian economy is not at a place where […]

Clearly the Indian economy is not at a place where it wants to be. The Modi government finds itself in a chakravyuh that it is unable to fight its way out. The government is just unable to make or attract the investment needed to make the economy buoyant again. India enjoyed a decade of unprecedented growth from 2004–14 that seemed to have lost steam in the last year. It was largely caused by a huge decline in the proportion of capital investment expenditure. Despite the growth of the private and foreign investment, the Indian economy is still largely dependent on government investment to lead the investment and growth cycle.

The promise of Modi was that he was expected to set right this trend and once again begin a new cycle with government led investment. He promised us a hundred new cities, a nationwide grid of high-speed rail networks, a national river-linking program and so many other major transformational projects. A hundred new cities have now become a hundred smart cities, which means little more than free wi-fi networks. The nationwide grid of fast trains has now become an exorbitant and apparently uneconomical single bullet train joining Ahmedabad and Bombay. Similarly all other feasible and exciting promises made are now mere caricatures of what were promised. It is simply that the Modi government has been unable to free the economy from its high subsidy burden and PSU black hole, where only the oil and power companies earn a profit due to administered pricing.

Consequently the picture continues to be bleak. Output of capital goods contracted 1% in July against growth of 8.8% a year ago. Production of consumer durable goods shrank 1.3% against a nominal increase of 0.2% a year earlier.

Then came the twin black swan events. Demonetization came as a body blow to the cash-dependent unorganized sector that makes up 40% of India’s GDP. The unorganized sector also accounts for 90% of the total employment of around 450 million. The loss of jobs due to the two events — demonetization and hasty implementation of GST- is still not empirically confirmed. Estimates vary. The construction and vegetable and fruit retail sectors seem to have taken a massive hit and the ballpark estimation of loss of jobs is at about 25–30 million. These sectors mostly employ rural landless labour with few skills and hence forced into taking up daily wage and earnings sustenance. They don’t shout much and few notice their pain. Unlike the loss of even a few thousand jobs in the IT sector. 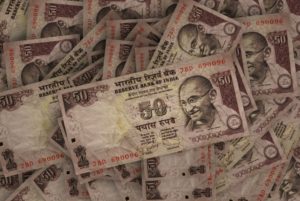 The implementation of GST forced companies to reduce production in the run-up to its 1 July implementation as dealers reduced inventory. The inadequate training and preparation was abundantly evident. The announcement of rates was hasty and the many mismatches between input and output rates compounded the confusion. Of the Rs.95000 crores collected in the first month, as much as Rs.65000 is due to be refunded. The problem is that the government doesn’t seem to have the cash to do so.

In a belated effort to reverse these trends the government is planning to loosen its fiscal deficit target of 3.2% of GDP to enable it to spend up to Rs. 50,000 crore. This is piddly sum for an economy whose GDP is over Rs.150 lakh crores now. Right now we have a net outflow of foreign investment. What we need is a huge dollop of cash infusion to boost investment. Loosening fiscal deficit norms will help. But meaningfully slashing subsidies when Modi’s term is on the slope to elections is not politically feasible.

There is that old saying that when the going gets tough, the tough get going. Modi should now show toughness and imagination that is tempered with realism. He needs to revive the national mood and generate optimism over the economy. He now needs a plan to drive investment. He doesn’t have to go far to find the money to fund this plan.

The government is sitting with reserves of nearly $400 billion with about $135 billion alone sitting in US banks earning next to nothing. These reserves are equal to about 80% of our foreign debt. Even after providing a quarter of the reserves to cover short-term hot money of NRI investors each taking a pound of flesh for mostly foreign bank financed investment in their mother country, we will still have $300 billion in hand. How much money can be freed from the other $300 billion for investment is the big question now? Kaushik Basu has said that India’s foreign reserves need not be more than the current account deficit (CAD) or about $80 billion. Others are more cautious.

This will certainly raise many eyebrows. One is surprised over the number of people who think holding huge reserves abroad in ridiculously low yield securities is a sign of our wealth. No. It is a sign of our stupidity.

Just holding enough reserves to cover the CAD or exports for a few months would be about enough. This nonsense of holding reserves to at least cover six months imports is just plain arbitrary and concocted by the people who made the Washington Consensus. This “consensus” assures New York banks plenty of cheap money to finance American domestic consumption and extravagances. The Chinese have now realized the stupidity of financing the US cheaply with their reserves which not long ago almost touched $4trillion. They have run it down by about $1trillion since.

Now how much do you think the US foreign reserves amount to? Hold your seat. It is now $65 billion or about a fifth of India’s. What a travesty.

Clearly running them down by $100–120 billion or Rs.6.5L- 8L crores can be contemplated. The government could establish an India Infrastructure Investment Fund and start shifting meaningful fractions from the foreign reserves into this fund. A board of well-regarded experts, who can allocate investments on merits to prevent the usual leakages and political misuse, could administer the fund. The fund must also mandate the minimum level of local procurement and investment to boost Make in India.

Slow growth and no new jobs are Narendra Modi’s twin Achilles heels. He is vulnerable on both counts. He must seize the moment with both hands and start running with both legs.